Haldiram!! The name itself beckons quality snacks. From a nascent Indian Startup to a world known Company. We have tried to compile the journey of a thousand miles that this company has covered, so read on. 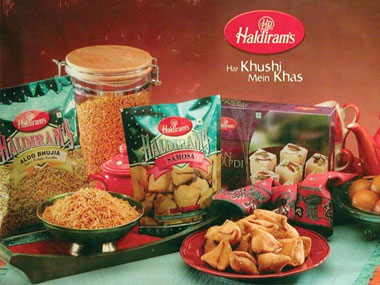 Haldiram’s  is a major Indian sweets and snacks manufacturer based in Nagpur, Maharashtra, India. Haldiram’s has over 100 products in today’s date, however, the Haldiram Story began in 1937 when one Gangabhisan Aggarwal started a shop selling ‘Namkeens’ in the town of Bikaner, Rajasthan.It was really this gentleman’s father Tansukhdas who originally started the ‘Bhujiya’ business but a new found popularity was gained by Gangabhisan’s small setup. The name Haldiram as the story goes was his another name which was taken forward by his youngest son Rameshwar Lal who opened a shop in Calcutta, West Bengal by the name, ‘Haldiram Bhujiawala’.This name was the stepping stone to the later success story of Haldiram.

The company has manufacturing plants in Nagpur, New Delhi, Kolkata, Bikaner. Haldiram’s has its own retail chain stores and a range of restaurants in Nagpur and Delhi. In contemporary times, Haldiram’s products are exported to several countries worldwide, including Sri Lanka, United Kingdom, United States, Canada, United Arab Emirates, Australia, New Zealand, Japan, Thailand and others. In expansion, the company’s first manufacturing plant was located in Calcutta. In 1970 a larger manufacturing plant was established in Nagpur. Another manufacturing plant was established in New Delhi, the capital of India, in the early 1990s, which also had a retail store.In 2003, the company began the process of developing convenience foods to be marketed to consumers. In 2008, the chairman of the company’s Nagpur branch was Shivkishan Agarwal.In 2014, Haldiram was ranked 55th among India’s most trusted brands according to the Brand Trust Report, a study conducted by Trust Research Advisory.

From selling bhujiyas some 70 years ago in Bikaner, Haldiram’s was the first to lay emphasis on packaging and presentation of its ready-to-eat snacks. The company with a turnover of Rs 400 crore and a brand valuation of Rs 1,500 crore, is now divided amongst three factions of the family, with strictly outlined territories for each unit located in Kolkata, Delhi and Nagpur. One of India’s biggest packaged food brands, with estimated turnover of Rs 400 crore and a self-proclaimed brand valuation of Rs 1,500 crore, Haldiram’s transition from a one-counter sweet shop in Bikaner in the early 1940’s to a full-fledged Indian snack foods company today has taken a lot of people by surprise.  Its namkeens tapped the needs of the lowest common denominator.

Haldiram despite captures by Nathu’s, Aggarwal’s  and Bikanerwala still retains a market share of 25% with a total turnover of Rs.400 Crores.Credit goes to it’s USP of serving authentic Indian snacks prepared with unmatched hygeine and standardized quality.Also it has built the entire empire around the core of Namkeen and sweets which has added to its portfolio of achievements and serves as an important chapter in history and success story of Haldiram.