Gautam Mago steps down from the position of MD of VC investment firm, Sequoia India

MD of VC investment firm, Sequoia India, Gautam Mago has announced his exit from the company. In a series of tweets he made public his decision to step down from the current role in the company he had been working with, for the last 10 years. His next plans are not known as of now. 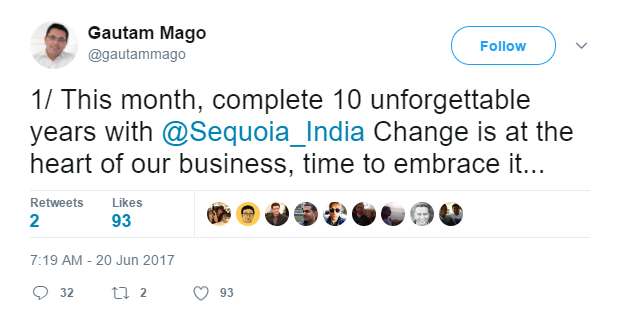 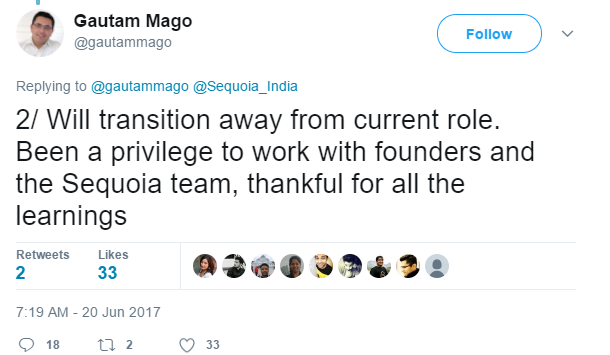 Gautam, who joined Sequoia India in August 2009 was part of Sequoia’s high end deals due to this focus  and vision for the future. His interests being the areas where technology meets and impacts markets, he said :

“Market and technology keep changing. The only certainty is that tomorrow’ focus will be different from today,”

The investments that he has been a part of vary from cab-hailing space to furniture retailing and digital payments. As per the Sequoia India website, Gautam Mago was involved in at least 16 of the firm’s portfolio deals which includes both tech and non-tech. He was involved with companies such as BankBazaar, Belong, Capital Float, Fintellix, MadStreetDen, Mobikwik, Ola. He was also part of investing in portfolio companies such as Oyo, Porter, Practo, Runnr, Sai Life Sciences, Star Health, TinyOwl, UnitedLex, and Urban Ladder

Gautam is an alumnus of IIM Calcutta from the 2004 batch. Prior to that, he did his Masters in Business from Mumbai University.  He started his VC career as an analyst for Arthur Andersen. From there, he progressed to working as an Associate with global consulting firm McKinsey & Co.

Sequoia started operations in India in 2006. It has invested in over 100 companies across sectors such as, healthcare, consumer and financial services. Sequoia India is known for its investment in companies such as SirionLabs, Grofers, Zomato, GirnarSoft, GirnarSoft, BYJU’s, Zillingo.